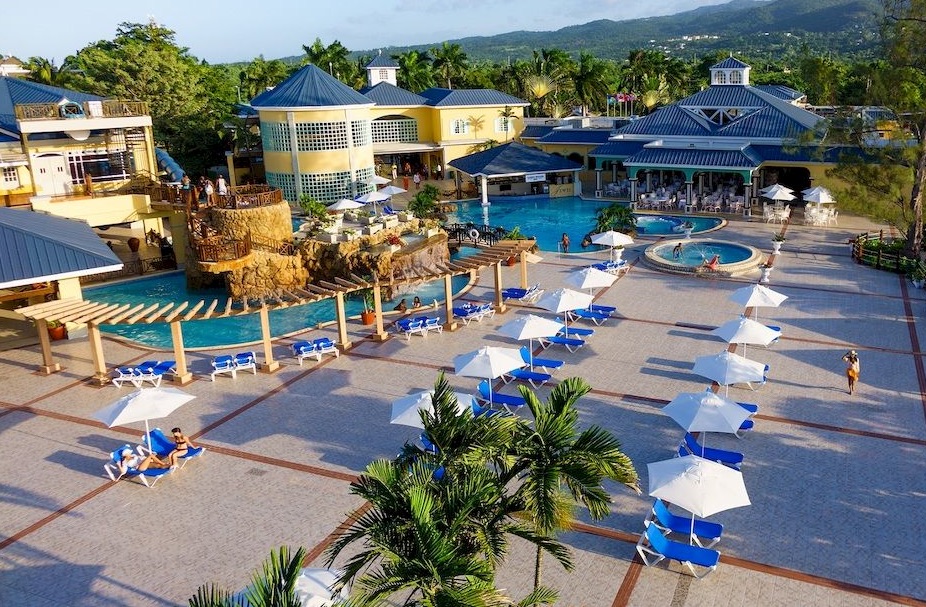 This adults-only, all-inclusive resort in Runaway Bay features movies on the beach, complimentary access to the Runaway Bay Golf Club, a large boardwalk, two secluded beaches and a beachfront cove, as well as three separate pool areas and a 202-foot double-looped waterslide.

The all-inclusive, adults-onlyJewel Paradise Cove Beach Resort & Spa is located on the beach inRunaway Bay, near Ocho Rios, Dunn’s River Falls and Dolphin Cove. Highlights of the resort include movies on the beach, complimentary access to the Runaway Bay Golf Club, a large boardwalk, two secluded beaches and a beachfront cove, as well as three separate pool areas and a 202-foot double-looped waterslide.

Other resort amenities include a two-story spa, daily live entertainment, a fitness center, and a nightclub.

This resort is all inclusive. Rates include meals and beverages at seven restaurants and a variety of bars, including swim-up, juice, and coffee bars. Bars feature a “Gem of the Day” speciality drink.

Featured amenities include a business center, a computer station, and a 24-hour front desk. Planning an event in Runaway Bay? This resort has 3,000 square feet (270 square meters) of space consisting of a conference center and conference space. A roundtrip airport shuttle is complimentary at scheduled times.

Resort travel ideas and inspiration for the Caribbean, Mexico, and more.

We use cookies on our website to give you the most relevant experience by remembering your preferences and repeat visits. By clicking “Accept”, you consent to the use of ALL the cookies. In case of sale of your personal information, you may opt out by using the link Do not sell my personal information.
Read MoreCookie settings
REJECTACCEPT
Manage consent

This website uses cookies to improve your experience while you navigate through the website. Out of these cookies, the cookies that are categorized as necessary are stored on your browser as they are essential for the working of basic functionalities of the website. We also use third-party cookies that help us analyze and understand how you use this website. These cookies will be stored in your browser only with your consent. You also have the option to opt-out of these cookies. But opting out of some of these cookies may have an effect on your browsing experience.
Necessary Always Enabled
Necessary cookies are absolutely essential for the website to function properly. These cookies ensure basic functionalities and security features of the website, anonymously.
Functional
Functional cookies help to perform certain functionalities like sharing the content of the website on social media platforms, collect feedbacks, and other third-party features.
Performance
Performance cookies are used to understand and analyze the key performance indexes of the website which helps in delivering a better user experience for the visitors.
Analytics
Analytical cookies are used to understand how visitors interact with the website. These cookies help provide information on metrics the number of visitors, bounce rate, traffic source, etc.
Advertisement
Advertisement cookies are used to provide visitors with relevant ads and marketing campaigns. These cookies track visitors across websites and collect information to provide customized ads.
Others
Other uncategorized cookies are those that are being analyzed and have not been classified into a category as yet.
Save & Accept
Powered by